Comprehensive consultation and representation
in elder law and environmental law.


Prior to joining Bessenyey & Van Tuyn LLC, Ms. Schmidt spent a year as a legal intern at Puerto Rico Legal Services, Inc. and as a student clincian at Vermont Law School’s renowned Environmental & Natural Resources Law Clinic. During that year, she helped represent more than twenty individual and nonprofit clients in a successful effort to bring about the withdrawal of a dredge-and-fill permit application under Section 404 of the Clean Water Act that had been filed by the government of Puerto Rico in connection with the proposed construction of a 92-mile natural gas pipeline. If approved, the pipeline would have bisected ecologically sensitive areas and caused harmful effects on rural, low-income, Spanish-speaking communities across the entire island of Puerto Rico. In 2012 Ms. Schmidt was awarded the Law Student Ethics Award from the Association of Corporate Counsel for her advocacy work in Puerto Rico.


Before law school, Ms. Schmidt worked as an AmeriCorps Service Member with the California Department of Fish & Game, where she was involved in biological survey and restoration efforts for threatened salmon species of the Klamath River. It was her experience with dwindling salmon populations and water rights conflicts that spurred her desire to attend law school and to practice law in Alaska. She has also served as an organic geochemistry field and laboratory assistant at the Stroud Water Research Center in Pennsylvania. Ms. Schmidt received her J.D. degree from Vermont Law School in 2012 along with a Masters in Environmental Law and Policy, and she received her B.S. magna cum laude from the University of Pittsburgh in 2006. Ms. Schmidt spends her free time on long backpacking trips, improving her Spanish, and capturing Alaska’s beauty on film.

Contact Karen Schmidt at karen@bvt-law.com; add vCard to your contacts 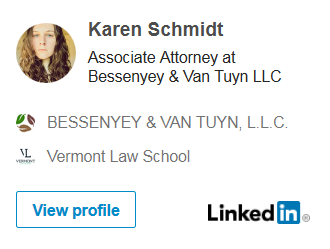 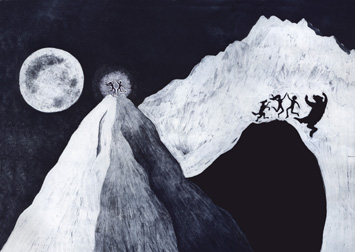